Video Content Analysis (VCA) or analytics is the term used in the CCTV profession to describe the computerised processing and analysis of video streams. Many industries find that implementing computer analysis maximises the security potential of their IP (internet protocol) CCTV systems. VCA has a variety of useful applications; for example the real-time analysis of video makes it possible to detect and highlight events of interest to the user. Pre-recorded video can also be analysed if the user needs to extract important data from the footage.

Video analytics algorithms provide significant benefits when utilised in closed-circuit surveillance systems. Reliance on a human operator alone can be a limited and costly resource. As diligent as a CCTV operator may be, over time their ability to effectively monitor and respond to events via video feed is essentially reduced. In both live and recorded incident review VCA maintains a high level of focus 24/7, 365 days a year, without the risk of losing concentration or interest. Their use allows for improved operational performance without an increase in manpower.

Additionally, with the vast quantity of footage now being recorded as video surveillance becomes more widespread it can be an arduous task to delve through and extract segments that are of interest to the user. When VCA software is combined with IP CCTV systems this task becomes significantly easier, as the computer isolates the necessary segments according to pre-set conditions by the CCTV operator, reducing the time and manpower needed.

VCA is gaining momentum as the need for optimal surveillance performance increases. The effectiveness of IP CCTV systems, whatever the needs and specifications of the user, is vastly enhanced with the use of modern video analytics. 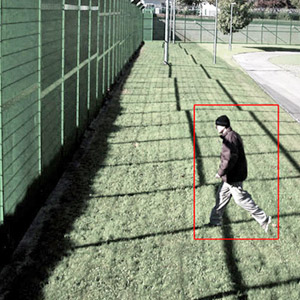 LISTED BELOW ARE EXAMPLES OF THE MAIN AREAS THAT VIDEO ANALYTICS ARE COMMONLY IMPLEMENTED.

Virtual tripwires can be designated onto a camera feed, acting as a presence sensor isolated in that zone and alerting the system operator when that tripwire is breached in real-time. The sophisticated algorithm reads and understands direction, so triggering of any alert depends on the approach of the object or person. So when individuals move in a particular direction across a zone, or when they move into the zone but not when they leave it. When pre-defined events are in place according to the needs and preferences of the user it eliminates the risk of false alarms occurring.

Virtual tripwires can be set up to cover a variety of zones, such as:

For instance, when a camera is set up to cover a perimeter fence the user can specify that any person attempting to climb over crosses the virtual tripwire and alerts the operator to the intrusion. Alternatively, if a virtual tripwire is in place on a railway line, user-defined settings can dictate that while trains passing by set off no alarms, a person straying onto the tracks from the side will. The algorithm can be adjusted to accommodate the difference in size of potential intrusions, so weather conditions or wildlife are less likely to set off a false alarm. For high-security applications, the system can alert operators when someone is loitering near the perimeter or approaching entrance gates after-hours. 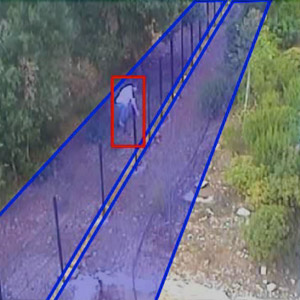 One of the more advanced algorithms available with VCA is the ability to intelligently monitor and record foot traffic. When embedded into network cameras the system automatically counts the number of people and the direction in which they are travelling in real-time. Embedded in the camera, this method of video analytics provides a cost-effective and easy to use way to measure the number of people passing through the camera’s field of vision. The direction of foot traffic and crowd flow can be incorporated into the algorithm much in the same way as virtual tripwires. 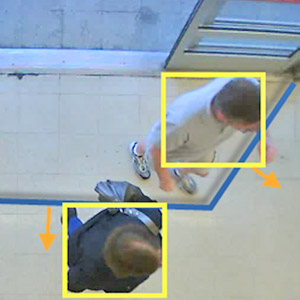 This use of video analytics is becoming more widespread, but is commonly used in the following situations:

In commercial and retail settings, people counting VCA algorithms can be beneficial in that they:

In the event of a fire, smoke detection can be incorporated within CCTV systems to save lives and infrastructure. Existing software means that smoke can be detected in the early stages of fire, alerting camera operators and emergency services swiftly to the issue. Smoke detection is typically used in environments such as warehouses, car parks and subways; the software can differentiate between present dust or fog and smoke caused by fire. In areas of larger volumes such as halls or warehouse buildings standard fire detectors or alarms may have problems detecting the smoke if it doesn’t rise high enough. The smoke detection analytic uses visual triggers, so that when used in collaboration with existing fire detectors safety and security is greatly improved for staff, assets and members of the public. 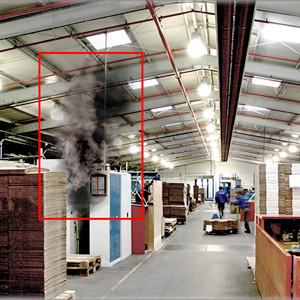